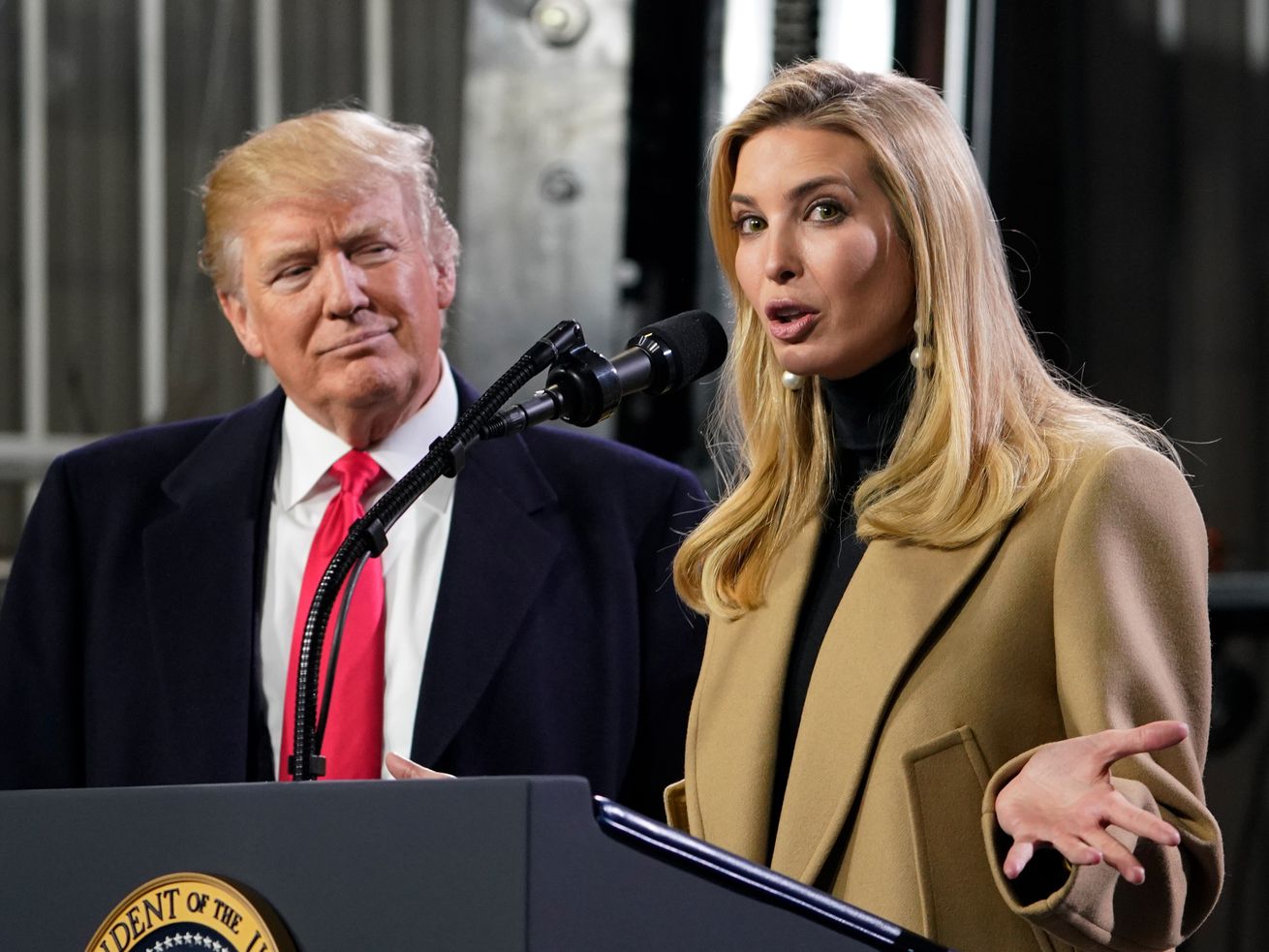 Ivanka Trump speaks alongside her father following a tour of the H&K Equipment Company in Coraopolis, Pennsylvania, in January 2018. | Mandel Ngan/AFP via Getty Images

This whopper shows how Trump’s lies take on a life of their own.

From Donald Trump’s 2016 presidential inauguration through the middle of last month, the American economy added a total of about 6 million jobs. But during a speech to the Economic Club of New York on Tuesday, he credited his daughter Ivanka with personally creating more than double that many jobs than that over the same timespan.

“When she started this, two and a half years ago, her goal was 500,000 jobs,” Trump said, referring to the goal of a White House workforce policy advisory board co-chaired by Ivanka. “She’s now created 14 million jobs … 14 million from 500,000. Fourteen million and going up.”

“14 million and going up,” he adds. pic.twitter.com/7E8uSEgjtL

To be clear, the economy isn’t in bad shape, even if Trump’s jobs record to date lags behind Obama. While GDP growth so far this year has been unspectacular and wages are stagnant, the unemployment rate is at a 50-year low. That means that people who want to find a job can, for the most part, find a job. But there isn’t a shred of evidence that Ivanka Trump has created a single one of them, much less tens of millions — aside perhaps from the 18 people who worked for her namesake fashion brand before she shut it down in July of last year.

Trump, however, is conflating the two — and in this example, he has seemingly rubbed off on his daughter. Speaking at a White House event in October of last year, Ivanka alluded to the training opportunities created with the help of her workforce policy board and said “we’re up to 6.3 million new jobs. That represents 5 percent of the current workforce. So it’s really remarkable.” Again, however, a training opportunity is not a job.

Not only is Trump’s claim about Ivanka and job creation totally absurd, but it also illustrates how some of Trump’s lies grow more outlandish over time as he gradually embellishes them.

During a White House event in February of this year, Trump claimed that Ivanka “has created millions of jobs.” That claim was obviously false and prompted the aforementioned Washington Post fact-check. By July, however, Trump added a veneer of specificity to his fib by saying Ivanka “has worked on almost 10 million jobs.” Now, on Trump’s third telling, not only has Ivanka “worked on” jobs, but the number she’s supposedly directly created has been jacked up all the way to 14 million.

This sort of lie escalation is commonplace for Trump. In fact, a similar dynamic was on display during another part of his speech in New York on Tuesday when he bragged about how tariffs are hurting the Chinese economy.

Trump says China, which has reported its lowest GDP growth in 27 years, is having its worst year is “more than 57 years.” He’d been consistently saying “57” for a while after starting with the correct figure and then going all the way up to “61.”

To cite another example, last month I detailed how it took Trump mere weeks to go from claiming America “was very low on ammunition” when he took office to escalating things and saying even more absurdly that “when I took over our military, we did not have ammunition.”

And this week, Trump claimed on Twitter that his election-eve rally in Kentucky helped “lift the poll numbers of Kentucky Governor Matt Bevin by 19 points” — a false claim even more outlandish than the one he initially made last week, when he tried to take credit for Bevin not losing by more than he did by claiming that because of his rally Bevin “picked up at least 15 points in [the] last day.” (The last poll conducted before the Kentucky election actually showed Bevin ahead by 5 points.)

Of course, it’s not exactly breaking news that Trump’s truth barometer is broken beyond repair. As of August, he had made more than 12,000 false or misleading claims over the course of his presidency. Yesterday, I wrote about how he’s willing to lie even in situations where the most cursory examination of what he’s saying proves that he’s fibbing.

But Trump’s lie about Ivanka creating more jobs than have been added to the entire American economy since he took office shows how he just can’t help himself. He builds on his lies until what he’s saying becomes so untethered from reality that it’s impossible to take seriously. The dynamic would be comical if Trump wasn’t supposed to be the leader of the free world.

Greg Gutfeld Loses It Over the Pomp and Circumstance of Impeachment: ‘Like a Baptism of the Addams Family!’

Impeachment managers read the charges against Trump to the Senate.

Greg Gutfeld Loses It Over the Pomp and Circumstance of Impeachment: ‘Like a Baptism of the Addams Family!’

Impeachment managers read the charges against Trump to the Senate.