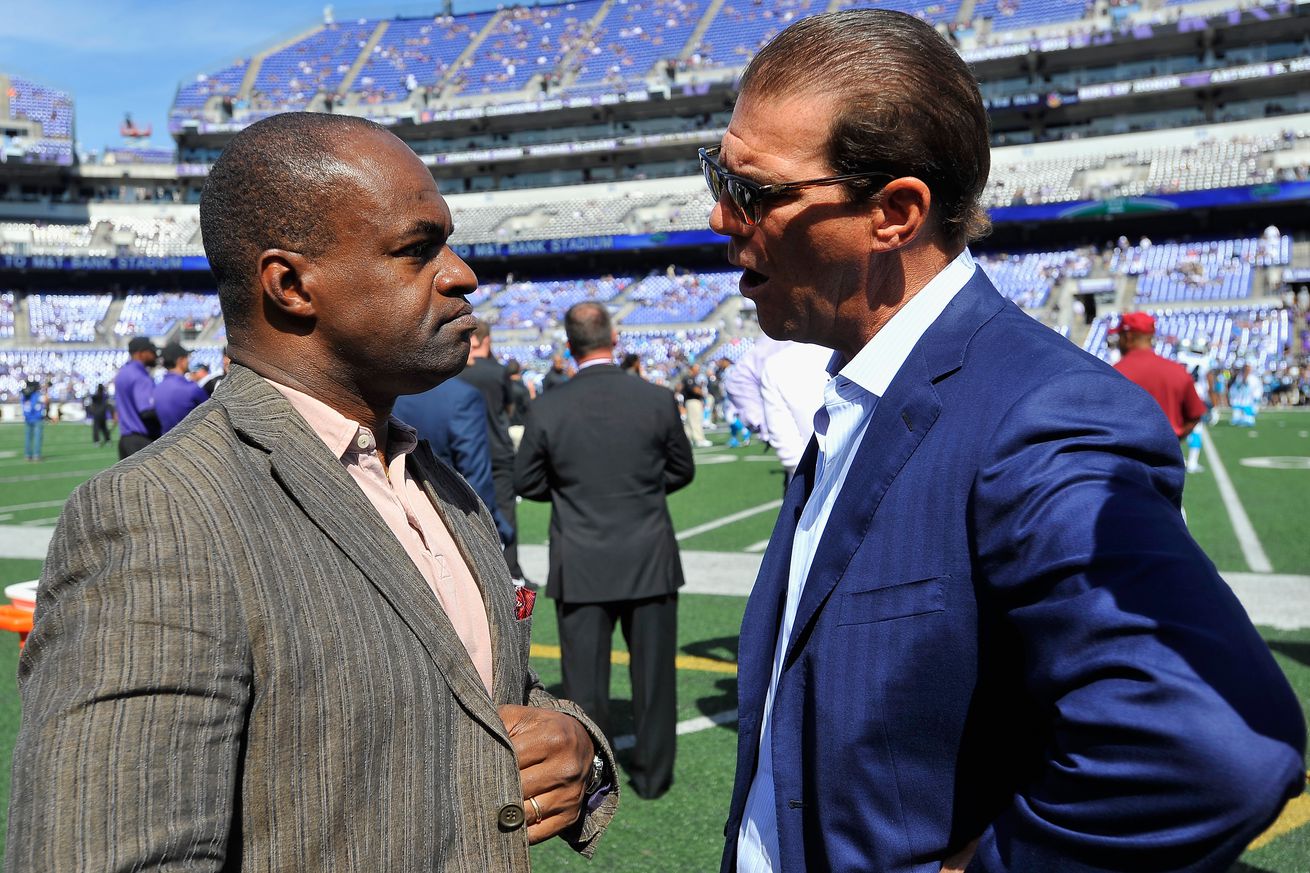 The NFL and NFLPA are trying to get a jump start on negotiating a new collective bargaining agreement two years in advance.

The NFL and NFLPA have a daunting task ahead of them: Reach common ground on a new collective bargaining agreement in time to avoid a work stoppage ahead of the 2021 season.

The current CBA — set to expire after the 2020 season — was agreed upon in 2011 after a 132-day lockout. There were two even worse work stoppages a few decades ago when the 1982 and 1987 NFL seasons were both shortened by player strikes.

Seeking to avoid that kind of labor dispute, the NFL and NFLPA got a jumpstart on their 2021 negotiations by kicking them off two years in advance. How much progress they’ve made since then depends on who you ask.

The two sides had early meetings

When exactly the NFL and NFLPA descended on Minneapolis in spring 2019 for the first negotiations isn’t clear. Giants owner John Mara said at the NFL Annual Meeting the two sides would have preliminary talks “in early to mid-April,” and the first indication that the talks started came on April 9.

That’s when ESPN’s Todd Archer reported Jerry Jones missed a press conference to announce a new contract for DeMarcus Lawrence because he’s in Minneapolis for CBA talks. A few hours later, a joint statement was released:

“Today, the members of the NFL’s Management Council and the NFLPA’s Executive Committee met to discuss negotiations for a new collective bargaining agreement. The League and the Union have committed to meet regularly in the coming months, which will involve staff, NFL leadership, members of the NFLPA Executive Committee and Player Representatives.”

They met throughout the summer and finally broke talks in late August ahead of the 2019 regular season.

Did progress on a new CBA actually get made this early?

The talks started two years ahead of the expiration of the CBA, so the biggest question the sides had to answer in the preliminary meetings was just how much work they have to do.

According to the Washington Post’s John Clayton, it really wasn’t much. He wrote that there was optimism a deal could get done as early as 2019. That always seemed unrealistic, though.

Still, Clayton said both sides were happy with the current CBA due to the fast rising salary cap and minimum spending requirement (teams are required to spend at least 89 percent of their caps):

With that much money being spent, the feeling among some union leaders is that there is an incentive for players to make a deal rather than enter into an extended labor dispute. The NFL is on the verge of surpassing $15 billion in revenue, with the league’s television deals due to be extended within the next year. Each team received $255 million of shared revenue last year, with most of it coming from television.

NFLPA president Eric Winston wasn’t quite as positive about the status quo, though:

Any conversation with NFL owners will be a renegotiation for a new deal, not an extension. At our board meetings we told everyone to prepare for a work stoppage; nothing has changed. https://t.co/DE2RLh1tBL

In August 2019, the Washington Post said the talks were “progressing,” but also said it’s still way too early to expect a resolution to come soon:

Executives with several NFL teams said it’s a good sign that talks are taking place without obvious acrimony or public sniping between the two sides. But they described the discussions as remaining in the relatively early stages and said they would be surprised if the process accelerates enough in the coming weeks to produce a near-term deal. A more realistic goal, one of those executives said, might be next spring.

“I’ve got a feeling it won’t be as simple as it was last time,” Jenkins told ESPN. “Just because you have more players like myself who have been through the lockout before, saw how the NFLPA leadership handled that into where we are now, which I don’t think was a bad deal but there is a lot that I feel like we want to get back as players, or get as players.”

A month after the preliminary talks got started, NFL Network’s Ian Rapoport reported the conversation between the two sides was “cordial” and “amicable.”

Though it’s possible a deal could be reached before the 2019 season, negotiations would have to ramp up considerably. Unless the pace changes, that’s not seen as feasible. Perhaps more likely is a deal next spring, a year before the CBA expires following the 2020 season.

One source went as far as saying, as of now, there are disagreements but no contentious issues like last time. “Nothing that would make it blow up,” as of now, one person briefed on the talks said.

The New York Times warned that it’s still early to get too optimistic, though.

Officials from the league and the players’ union, who asked not to be identified so as not to be seen as negotiating in public, cautioned that labor negotiations had just begun and could quickly sour.

But the NFL’s early negotiation tactics bode well for the future. Via the Times:

The N.F.L., however, has shifted away from its combative approach of the last round of bargaining. People involved in the current discussions expect the league to agree to a modest increase in the players’ share of league revenue, and for there to be few major changes to an agreement that has led to significant gains in league revenue and player compensation for the past eight years.

Two years ago, NFLPA officials told players to begin the process of saving money for a potential lockout. That’s advice that hasn’t changed. He said as much in May 2019:

NFLPA Exec Dir De Smith sent an email out to all NFL agents this morning, advising them to urge player clients to save money in the event of a work stoppage.
“We are advising players to plan for a work stoppage of at least a year in length,” the letter states.
More in SBD.

And again in January 2020 just before Super Bowl 54. Via NBC Sports:

“People need to understand that it’s really easy to call for a work stoppage; it’s really hard to win one,” Smith said at the rally. “So that’s why I started notifying players four years ago about saving their checks, making changes to their debt structure, and the reality is that if we want to hold out and get everything we want, that’s probably going to mean a two-year strike.”

From Super Bowl Live: Progress is being made on the new 10-year extension for a CBA, and optimism abounds. pic.twitter.com/fxH7Eprezi

There’s a clear battle between the two sides in setting the early narrative. The NFL appears to be pushing optimism, telling reporters and fans that both sides are happy with the current circumstances and probably won’t need a lengthy fight. The NFLPA, on the other hand, is warning that a labor dispute is likely and that an agreement is still distant.

What’s the No. 1 priority in the CBA talks?

A wise group of men once said “cash rules everything around me.” The negotiations of the next CBA will revolve around money, money, money, a couple other things, and money.

In 2011, the NFL and NFLPA agreed to a split of the league revenue with players getting 47-48.5 percent. That was down from 50 percent in the prior CBA. It was widely considered a win for the league and a loss for the players.

With league revenues soaring so much that the salary cap rose from $123 million in 2013 to $188.2 million in 2019 — more than a 50 percent increase in six years — a couple percentage points represent a LOT of money.

It’s unclear what exactly constitutes a “modest increase” for players, but if the NFL is willing to cede a chunk of their revenue it’ll help grease the wheels. What the league wants in return is more games. Via NFL.com in late August:

there still has yet to be a breakthrough on the No. 1 issue, with NFL owners continuing to want more regular-season games and NFL players continuing to want a larger share of revenue without adding regular-season games, sources say. Players are guaranteed 47 percent of total revenue under the current CBA, which is set to expire after the 2020 season.

The two sides are reportedly agreeable on the idea of expanding the postseason field from 12 teams to 14, though.

What other money issues will the NFL and NFLPA haggle over?

The NFLPA will aim to raise that revenue sharing percentage, and that number will likely be the crux of the negotiation. But the money talks will go deeper than that. Both sides have other ways to try to get a bigger piece of the pie. Here are some examples:

There are a few non-money items on the agenda too

Money is the biggest reason to expect a lengthy fight, but there are also non-money issues: the league’s personal conduct policy, the substance abuse policy, and the commissioner’s unilateral authority to hand down punishment, to name a few.

The possibility of an 18-game regular season, increased or decreased practice time, and changes to the players’ healthcare plan are a few more wrenches that could be tossed into the mix.

The idea of an 18-game schedule has been floated by the NFL for several years. The league reportedly came to the NFLPA with the idea of allowing players to only play in 16 games per season — aiming to quell the union’s concern of players being overworked. There are several issues with that idea that would make it a bad compromise for both sides, though.

That was also around the time a group of Hall of Famers led by Eric Dickerson threatened to boycott future induction ceremonies if the next CBA doesn’t include significantly better healthcare benefits and revenue sharing for Hall of Famers.

The conflicting reports on the CBA meetings thus far make it tough to gauge the progress so far. The likely answer is that it’ll take a lot more time for an agreement to be reached.

What happens if the NFL adds a 17th game?

Cramer’s week ahead: Coronavirus will impact stocks more than earnings