The White House on Wednesday objected to the publication of a book written by President Donald Trump’s former national security adviser, John Bolton, that depicts Trump as playing a central role in a pressure campaign on Ukraine, as the Senate impeachment trial entered a new phase.

A letter from the White House National Security Council to Bolton’s lawyer said the manuscript based on a preliminary review appeared to contain “significant amounts of classified information” and could not be published without the deletion of this material. Some of the material was considered top secret, according to the letter.

Democrats view Bolton as a key figure who could help them solidify their case against the president, and reports about the book’s contents appear to boost their arguments in the trial. Democrats want to call Bolton, a foreign policy hawk in several Republican administrations, and a small number of other officials to testify but many Republican senators have so far resisted the idea of having any witnesses.

The letter said the White House would be in touch with Bolton’s lawyer with “detailed guidance” for manuscript revisions.

Senators began the first of two planned days of posing questions to both Trump’s legal team and the Democratic legislators in the House of Representatives who have served as prosecutors in the trial on charges of abusing power and obstructing Congress arising from his request that Ukraine investigate political rival Joe Biden.

Democratic senators used their questions to cast doubt on the veracity of the Trump defence and make their case for witnesses including Bolton.

The Senate is expected to acquit Trump but allowing witnesses such as Bolton could inflict political damage on the Republican president as he seeks re-election on November 3. Biden is a leading candidate for the Democratic nomination to challenge Trump.

Contradicting Trump’s version of events, Bolton wrote in an unpublished book manuscript that the president told him he wanted to freeze $391m in security aid to Ukraine until Kyiv pursued investigations into Democrats, including Biden and the former vice president’s son Hunter Biden, the New York Times reported.

Bolton’s allegations go to the heart of the impeachment charges. Democrats have said Trump abused his power by using the security aid – passed by Congress to help Ukraine battle Russia-backed separatists – as leverage to get a foreign power to smear a political rival. Trump’s legal team has argued that the evidence supporting that allegation is based on hearsay.

A Bolton spokeswoman had no comment on the White House letter. Neither his publisher nor lawyer immediately responded to requests for comment.

The Senate is expected on Friday to vote on whether to call witnesses including Bolton. Democrats need four Republican senators to join them in order to get a majority in the 100-seat Senate. Republican leaders are hoping to vote as quickly as possible to acquit Trump, leaving him in office.

Removing Trump from office would take a two-thirds majority. There are 53 Republican senators and none has publicly advocated removal. The Democratic-led House impeached Trump last month.

Trump added that Bolton, who left his White House post in September, “goes out and IMMEDIATELY writes a nasty & untrue book. All Classified National Security. Who would do this?”

Trump, who has denied Bolton’s account, has said he fired Bolton. Bolton, a foreign policy hawk who served as a temporary “recess appointee” as American ambassador to the United Nations under Republican former President George W Bush, has said he quit.

Question time in the Senate

Responding to a question by top Senate Democrat Chuck Schumer, lead House prosecutor Adam Schiff responded that there would be no way to have a fair trial without witnesses.

“And when you have a witness as plainly relevant as John Bolton who goes to the heart of the most serious and most egregious of the president’s misconduct, who has volunteered to come and testify – to turn him away, to look the other way, I think is deeply at odds with being an impartial juror,” Schiff said.

Senators submitted questions in writing to be read aloud by US Chief Justice John Roberts, who is presiding over the trial. 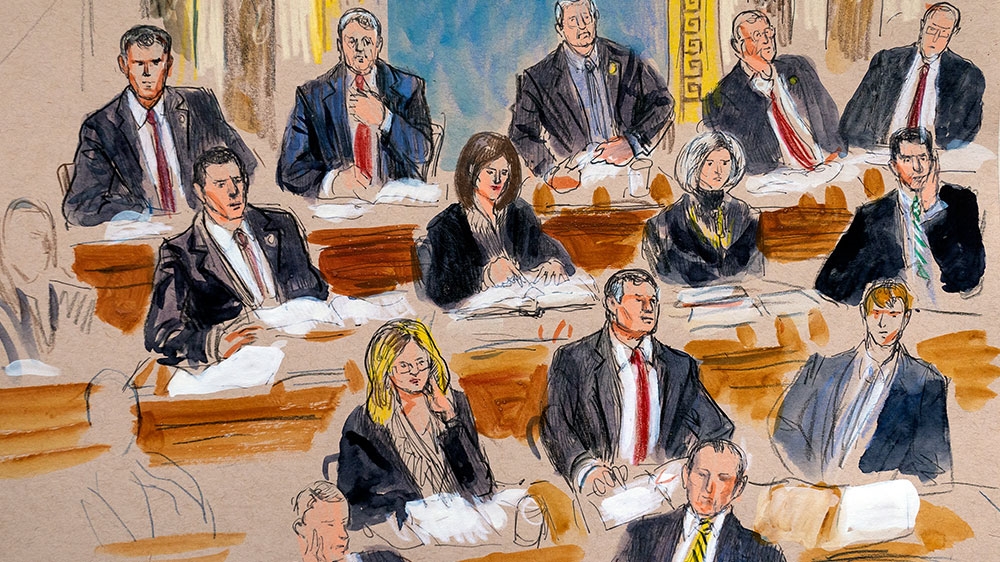 Democrat Eliot Engel, chairman of the House Foreign Affairs Committee, took issue with Trump’s contention that Bolton never said anything about the Ukraine matter when he left his post. Engel said Bolton suggested to him in a September 23 phone call that the panel should look into Trump’s removal last May of Marie Yovanovitch as American ambassador to Ukraine, a pivotal event in the Ukraine matter.

Trump removed her after his personal lawyer Rudy Giuliani and others mounted a negative campaign against her at a time when Giuliani was pressing Ukraine to pursue the politically motivated investigations at the centre of the impeachment drama.

Ukrainian-born US businessman Lev Parnas, who worked with Giuliani to pressure Ukraine, arrived in Washington, DC, from New York and headed towards the US Capitol, but was refused entrance. He was trailed by TV cameras, photographers and sign-toting demonstrators.

Parnas stopped by Democratic Leader Schumer’s office to pick up tickets to the trial. No electronics are allowed in the Senate visitors’ gallery, and Parnas has been ordered to wear an ankle bracelet to track his location as he awaits trial on federal campaign finance charges.

Parnas indicated willingness to testify in the trial, adding, “The president knew everything that was going on with Ukraine.”

Vindman Gets Escorted Out of White House After Trump Fires Him

Cramer’s week ahead: Coronavirus will impact stocks more than earnings