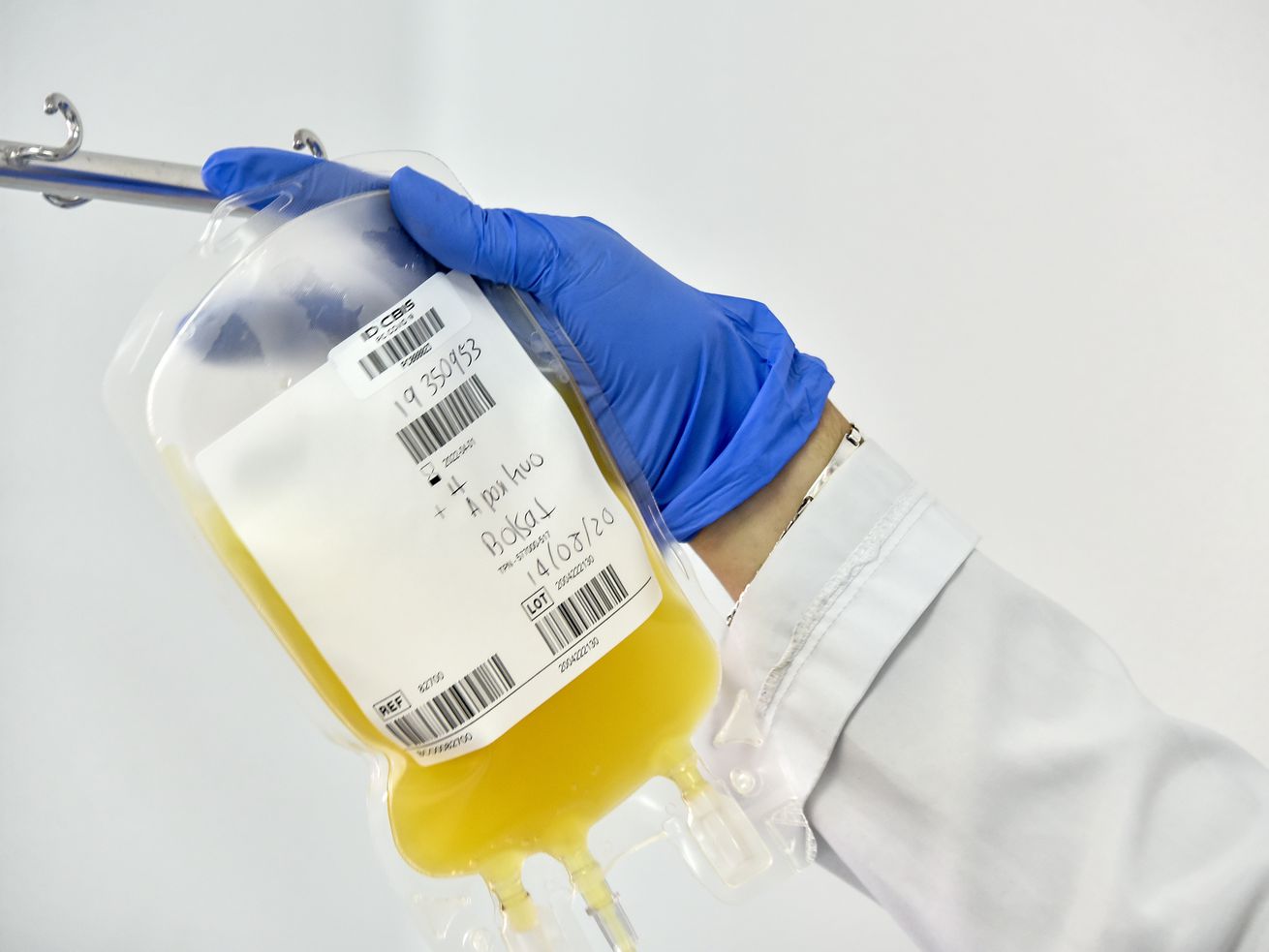 The US Food and Drug Administration this week granted emergency use authorization for convalescent plasma as a treatment for Covid-19. | Guillermo Legaria/Getty Images

The White House is leaning on regulators to authorize treatments for Covid-19 before the election.

The Food and Drug Administration whipped up a fierce controversy Sunday when it decided to grant an Emergency Use Authorization, or EUA, for convalescent plasma to be used as a treatment for Covid-19. The decision came after many experts, including Anthony Fauci, director of the National Institute of Allergy and Infectious Diseases, had warned the agency there wasn’t enough evidence to fast-track approval for the novel treatment.

In a statement, FDA commissioner Stephen Hahn said, “We’re encouraged by the early promising data that we’ve seen about convalescent plasma. The data from studies conducted this year shows that plasma from patients who’ve recovered from Covid-19 has the potential to help treat those who are suffering from the effects of getting this terrible virus.”

President Trump, meanwhile, described the treatment as a “breakthrough.”

Convalescent plasma is already being used in dire cases of Covid-19 and is being studied by several research groups. But many scientists and doctors say there isn’t yet sufficient evidence to warrant an EUA.

“The evidence [the FDA is] drawing on is not ready for primetime,” said Jeremy Faust, an attending physician in the Brigham and Women’s Hospital and an instructor at Harvard Medical School.

The authorization comes after President Trump publicly pressured federal agencies to approve drugs and vaccines for Covid-19 ahead of the November election, raising alarm that the FDA is bowing to political pressure to greenlight unproven treatments.

White House Chief of Staff Mark Meadows made it clear that Trump is leaning on the FDA. “If they don’t see the light, they need to feel the heat because the American people are suffering,” he told ABC on Sunday. “This president knows it, and he’s going to put it on wherever — the FDA or NIH or anybody else — to make sure that we deliver on behalf of the American people.”

The deep state, or whoever, over at the FDA is making it very difficult for drug companies to get people in order to test the vaccines and therapeutics. Obviously, they are hoping to delay the answer until after November 3rd. Must focus on speed, and saving lives! @SteveFDA

Such pressure has moved the FDA before; for instance, it rushed an EUA in March for the anti-malaria drug hydroxychloroquine after President Trump repeatedly touted the drug as a “game changer” despite flimsy evidence for its effectiveness. The EUA was then revoked in June after the agency said the drug was “unlikely to be effective” and could cause serious side effects like heart arrhythmias.

With more than 170,000 people across the United States dead from Covid-19, there’s an urgent need to find effective treatments. But the appearance of political pressure could undermine confidence in government agencies and their support for other treatments and vaccines, adding to the long list of public health missteps and confusion around the pandemic.

The idea is that the plasma from people who have successfully withstood the virus contains antibodies, which can interfere with how a pathogen works or mark it as a target for elimination. That can then keep the disease in check or help the immune system eradicate it. It’s an approach that’s been used with varying degrees of success for other coronaviruses like SARS and MERS.

But Covid-19 is a markedly different disease, and so far, no randomized control trials, the gold standard of evidence, on convalescent plasma have been completed.

The FDA memo outlining the EUA for convalescent plasma cites just two randomized controlled trials, both of which were stopped early — one because it failed to recruit enough participants and the other because they found that the patients that were receiving plasma already had high levels of antibodies. Both found little to no benefit from the treatment, but they remain some of the best-constructed studies.

During Sunday’s press conference, Hahn reported that convalescent plasma would yield a 35 percent improvement in the survival rate of Covid-19 patients.

“A 35 percent improvement in survival is a pretty substantial clinical benefit,” said Hahn during a Sunday press conference. “What that means is, if the data continue to pan out, if 100 people are sick with Covid-19, 35 would have been saved with the administration of plasma.”

But researchers said that Hahn’s 35 percent improvement in survival claim is misleading. It comes from a retrospective preprint study that hasn’t undergone peer review, so some of the methods and findings may have flaws that would ordinarily be caught in the review process.

Faust pointed out that this retrospective study only sampled patients who were sick enough to go to the hospital. Out of those, the patients studied were only the ones who received convalescent plasma, were under the age of 80, and who did not receive mechanical ventilation.

“This big ‘breakthrough’ that they say is a 35 percent reduction in mortality, this is a subset of a subset of a subset in a retrospective study which has not been confirmed with a trial,” he said. “There’s nothing wrong with the study itself for what it is; what’s wrong is to rely on it to say that there’s been a breakthrough.”

Let’s be clear: Convalescent plasma could be a viable treatment for Covid-19. However, the vast majority of people infected with the virus get better on their own. Determining whether a treatment can actually hasten recovery from the illness requires controlled clinical trials. This means randomly sorting people into two groups — one that receives the treatment and one that receives a placebo — and then monitoring their progress with the disease. And that data is still lacking for convalescent plasma.

This treatment also carries risks. Plasma transfusions can lead to complications like acute lung injury and severe allergic reactions leading to anaphylactic shock. These are not common outcomes, but the risk isn’t zero. For people who are sick with Covid-19, it may be worth accepting some of these risks if there is a clear benefit. But if there isn’t, it becomes much harder to tolerate.

“You’re essentially asking people to play roulette with a treatment that may not work,” Faust said.

Another issue is that with the EUA, ongoing clinical trials can become more difficult. It becomes harder to recruit patients into clinical trials where they may receive a placebo if they know that they could get the actual treatment from their doctor.

All this means that it’s crucial to establish that convalescent plasma carries benefits that outweigh its risks before clearing it for widespread use.

The FDA is undermining its own credibility at a critical time

National and international health agencies have made a number of missteps during the Covid-19 pandemic, from how the World Health Organization reversed course on whether the virus could be spread person to person to the back and forth in the US about wearing masks.

But the political pressure mounting on the FDA from the White House could end up being the most consequential erosion of credibility since it could undermine the public’s trust in treatments for Covid-19 as well as an eventual vaccine. With the perception that drugs are being issued to meet the president’s demands, patients may be reluctant to take them.

That’s why some health advocates are so distressed by the FDA’s authorization of convalescent plasma, which serves as yet another example of politics getting its way over science.

“Make no mistake, the FDA’s decision to grant an emergency use authorization for COVID-19 convalescent plasma on the eve of the Republican National Convention represents the most blatant politicization of FDA decision-making in history,” said Michael Carome, director of the Health Research Group at the watchdog group Public Citizen, in a statement. “Such action seriously damages the FDA’s credibility during the greatest public health crisis in 100 years.”

And if a vaccine for Covid-19 were to gain approval before the November election — before phase 3 trials are complete — there will be concerns that it too was rushed. Fewer people might be inclined to get vaccinated, out of safety fears, making it harder to control the disease. That will have tremendous impacts on the lives of millions of people as they cope with the spread of the virus.

Building trust in public health agencies is therefore necessary for ending the Covid-19 pandemic, but it will take time. Hyping weak results or unproven drugs does more harm than good.

In the spring, we launched a program asking readers for financial contributions to help keep Vox free for everyone, and last week, we set a goal of reaching 20,000 contributors. Well, you helped us blow past that. Today, we are extending that goal to 25,000. Millions turn to Vox each month to understand an increasingly chaotic world — from what is happening with the USPS to the coronavirus crisis to what is, quite possibly, the most consequential presidential election of our lifetimes. Even when the economy and the news advertising market recovers, your support will be a critical part of sustaining our resource-intensive work — and helping everyone make sense of an increasingly chaotic world. Contribute today from as little as $3.