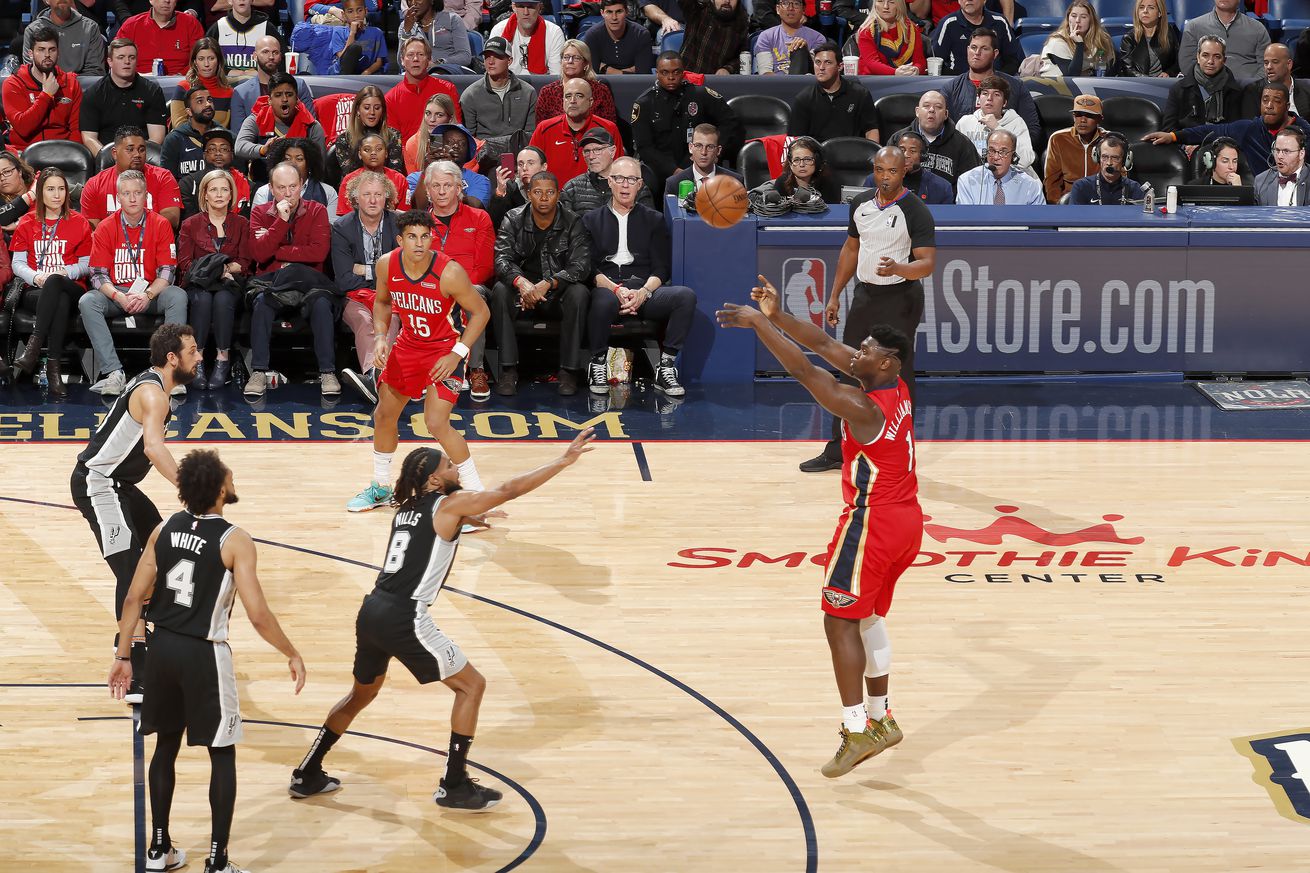 It sure looked like Zion Williamson was failing to live up to the hype in what was considered one of the most anticipated debuts in NBA history against the San Antonio Spurs on Wednesday night. The New Orleans Pelicans rookie scored only two points in the first half, rarely looking at the basket and generally seeming unsure if he should push his body.

More than anything, Williamson looked out of basketball shape: he spent his early possessions loafing up and down the floor, and never put his world class combination of speed and power on display. This made sense after missing the first three months of the season following meniscus surgery. Things started to change in the third quarter when Williamson soared for an impossible out-of-area rebound and then pushed the break for a Pelicans bucket. Still, he only had five points as the game headed to the fourth quarter.

Everything changed in the final frame. Over the course of 3:08, Williamson caught fire, scoring 17 consecutive points for New Orleans on the back of 4-for-4 shooting from three-point range. It was everything NBA fans were tuning in to see.

Williamson’s incredible scoring burst gave New Orleans a brief lead, but head coach Alvin Gentry would pull him soon after. New Orleans would lose the game, 121-117, to a Spurs team they’re battling for the No. 8 seed. While it would have been amazing to see Williamson stay in the game when he was hot — remember, New Orleans said he had no minutes restriction entering the night, which was obviously untrue — his short stretch of greatness still provided one of the season’s most exhilarating moments.

Williamson’s final line in his first game: 22 points, seven rebounds, three assists, and five turnovers in 18 minutes. He shot 8-of-11 from the field and 4-of-4 from three-point range.

We provided live updates during Williamson’s debut all night. Follow along as what initially felt like a disappointment turned into something special.

ESPN had a pregame cam following Williamson through warmups.

Williamson is in the starting lineup for New Orleans, starting at power forward.

Zion didn’t take a shot from the field before the first TV timeout, but he did register his first assist on this feed to Brandon Ingram.

Williamson scored his first NBA basket off an offensive rebound and putback.

Zion’s running like he’s trying to avoid an injury, which is understandable I suppose.

The Spurs lead the Pelicans, 60-51, at halftime. Williamson has played eight minutes, and has two points, three rebounds, one assist, and two turnovers.

Williamson went to the foul line early in the third quarter, and split a pair of free throws:

He also had two sloppy turnovers in the third quarter and a layup on an assist from fellow rookie Jaxson Hayes.

Zion fumbles the chance for a slam but scores anyway pic.twitter.com/0j6Z7V2cgW

He checked out in the third with 8:30 remaining.

This rebound and transition pass from Zion in the fourth quarter was his most impressive play of the night to that point.

Zion with a sweet rebound and sparks the transition bucket pic.twitter.com/7lV2pMRfme

Here are the highlights from Williamson’s 17 straight points in the fourth quarter:

Zion Williamson scored 17 points in a 3-minute stretch during the 4th quarter. Here are all 6 made shots: pic.twitter.com/ineIxjIX63

Here are all of the three-pointers individually:

Williamson finished his night with 22 points in 18 minutes. Almost all of the damage came in a quick stretch during the fourth quarter. He checked out of the game shortly after, and was finished for the night.

This about sums it up:

What happens if the NFL adds a 17th game?

How to Start a Consulting Business: Determine Your Business Model

3 Strategies to Revive And Grow Your Facebook Business Page